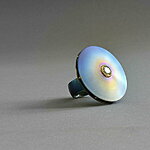 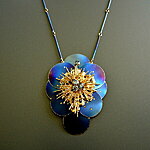 When we look at the sky we see beautiful clouds, freedom, and unfathomable space filled with stars. However out there is a lot that is hidden from our view, such as parts of dismantled spacecrafts and satellites. In the name of science, NASA and others enter space, however it leaves behind an immense trace of waste, which we rarely discuss. Even though we can’t directly affect this process, it’s our desire to attract attention to this problem. By creating this collection, we wish to spread the message that not only the oceans of the world are becoming more polluted, but so is outer space. It is estimated that currently in outer space there are more than a half million various forms of debris, with the common mass that is similar to thousand African elephants. It is expected to be an immense problem of a near future, as we keep exploring cosmos.

The intriguing jewellery line „Kocmoc” was created in 2019, in collaboration with Latvian artist Valds Broze, Óde - the label of luxurious design objects, and Eco Diamond - a synthetic diamond manufacturer.